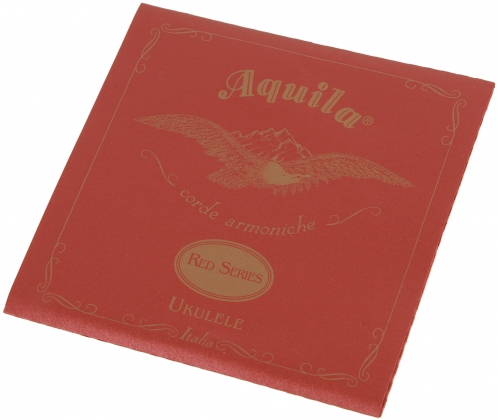 The RED SERIES® sets: a unique look and a strong, consistent sound. Until recently, it was necessary to increase a string’s gauge to reach lower frequencies. But increasing the string’s diameter also increases internal dampening. That make the string less bright, less responsive and more muffled; the thicker the string, the duller the sound. Aguira RED SERIES® revolutionary new approach - unique to us - changes the specific weight of the material, increasing it progressively to leave the gauge unchanged.

The result is amazing - the instrument sounds brighter, more powerful and more responsive through the entire range of the fret board. The strings also maintain their intonation better (because thicker strings need to be fretted harder, pulling them further out of tune). Until Aguila introduced the Red Series®, this result has only been achievedÂ with harps where the scale of the strings is continuously varied. RED SERIES® sets provide superior performance over traditional strings for musicians who love clear, sharp sounds and powerful voicing across the full scale of the instrument. You will never have heard a sound like this as before now it simply didn’t exist.

Specification:
• The technical solution adopted was firstly to make the Nylgut elastic and then addÂ red copper powder in order to increase the density to about twice that of standard white Nylgut.
• Surface: slightly rough; this texture has eliminated the squeak that sometime occurs with the Nylgut strings.
• Elasticity/Elongation: consistent withÂ white Nylgut!
• Performances:Â better than the first elastic version! They do not break under tension providing rapid, stable tuning!
• Intonation: accurate past the 12th fret
• Pressing the string firmly down on the frets does not cause the note to sharpen.
• It is not necessary to file the nut slot wider to accommodate our RED SERIES® string, as was necessary with the previous fluorocarbon G strings.
• Density: about twice than standard white Nylgut.
• Tuning: key of C – GCEA
• Set/strings: TENOR REGULAR SET high G
• Colour: red-brown